If this is America, I Don’t Want to Live Here. Thank God it’s Not. 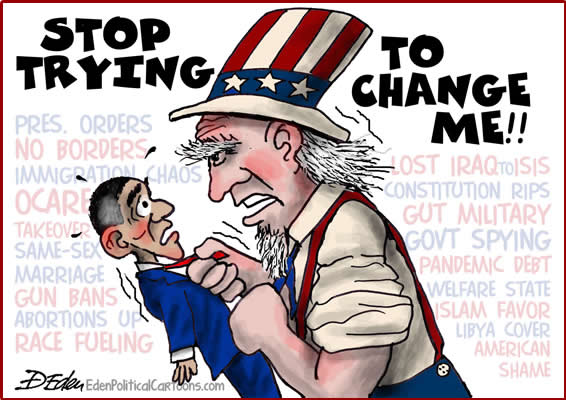 When I saw this political cartoon it knocked the wind out of me. In this cartoon, put out by the conservative political cartoonist, David Eden, a beefy, angry caucasian Uncle Sam has a slight, fearful Barack Obama by the tie. Uncle Sam screams at President Obama, “Stop Trying To Change Me!!” And, there it is. The conservative mindset, which differs so strongly from liberals. To conservatives, our country is an old, white, ruddy cheeked bully who is perfect exactly the way it is; no need to modernize, diversify or continue to improve. This cartoon embodies everything I’d like to eradicate from our country.

First, the arrogance of white people. How could anyone be so arrogant as to declare themselves the only expert on when the country is perfect and un-improveable? Do old, entitled white people realize there are just as many (or more) Americans who don’t believe we are so exceptional that there is no room for improvement? Does it ever dawn on them that many of their fellow citizens would really like to continue to evolve as a nation, not just stand still? Or, do they believe they live in their own America, and that the rest of us are just guests? Either way, I’m sick of this white person privilege; this assumption that only the rural, quiet, patriarchal, Christian America is the real America and the rest of us are just visitors who have overstayed our welcome. The point of America ought to be that all are welcome, without qualifications or fees.

The second thing that got me was the brutality. Do the people who made this, liked it and shared it really believe that the strongest thing we can be is violent? Do they really believe that people who disagree with them are so easily dominated? Do they not see that a civilized and modern community clenches agreements, not fists? It is bad enough to promote an image of intimidating opponents – but it is absolutely unpatriotic to depict physical threats to the President.

And then, there is that effective strategy of ridiculing an opponent until they become a laughingstock. That’s something I’d like to destroy. Uncle Sam’s bully towers over a quaking, sweating, crying President so that the viewer can see that his strut is really just a cover for a girly core. We can’t have honest conversations because conservatives attack the motives or manhood of liberals, rather than their solutions. And then everyone gets distracted.

Of course, don’t forget the misogyny. Even though Uncle Sam strikes the pose of your average abusive husband, he is blameless in his reaction. See, if Obama would stay in his place and accept the country as it is – old, white, traditional – Uncle Sam wouldn’t have lost his temper. Meddling women who try to change their husbands when they should just be grateful they caught a real man in the first place deserve to get hit.

But, finally, there are the sound bite bits that hover in the background that are either lies or just truthy enough to feed continued hatred for this President, and liberals in general. The bottom line is that not one of these accusations leveled toward the President (except maybe the one about government spying) have any foundation in the truth. Let’s take them one by one:

2025 – when white people sink into the minority – can’t come soon enough. We’re losing ground in so many ways – our infrastructure, our middle class, our internal security, our voting participation, our startup rates – all because a bunch of white people insist that any attempt to rebuild, shore up and modernize our country is unAmerican. Pointing out areas that need improvement is perceived as hatred. Until people like that lose their influence, we’re stuck in the mud, spinning our wheels.

This cartoon so perfectly encapsulates the chasm separating conservatives and liberals that I really do wonder whether we can remain in the same nation. Thankfully, there’s a light at the end of the tunnel. Most people don’t truly believe America is perfect, and there are millions of people out there fighting for progress and change. In the meantime, we need every person who sees that each American is both different and equal: reach past the folks who keep us static and spinning, and push us out of the ditch with your votes, your voice and your ambition.