Behind the Scenes of Jack’s Big Radio Debut 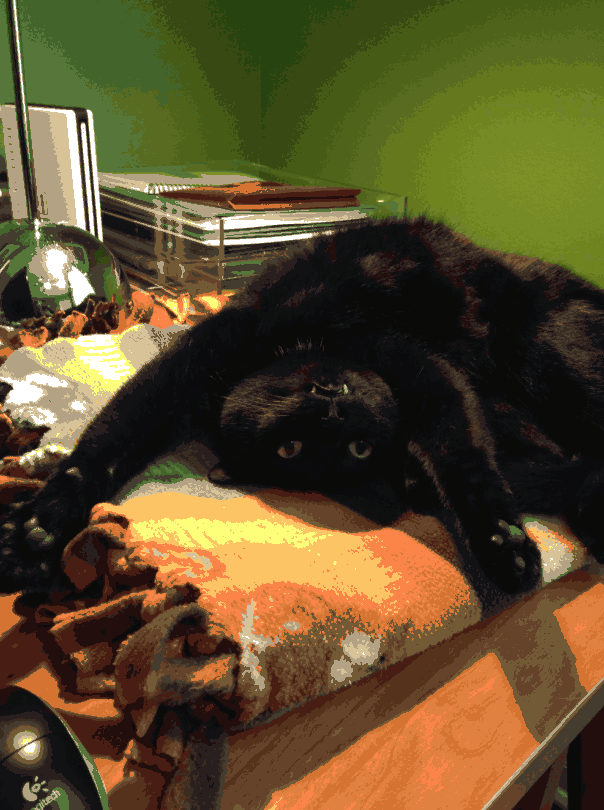 I recommend the podcast of my show from this week on Net Neutrality. I’m relatively proud of it, but, if you listen to the podcast, you’ll miss a guest we edited out: Jack, our rescue, feral black cat. We met Jack 3 years ago. He was in a no-kill shelter cage – he was (and is) tiny, strong and charming. For me, it was love at first sight.

Jack’s crazy. We think he is a trauma survivor. He has a scar on his belly, a nick in his neck and a 30 degree kink in his tail. He’s desperately afraid of certain men. When we first brought him home, we couldn’t pet his neck. He had odd, unpredictable short bursts of rage. He’s a terrible, scary patient at the vet, requiring two techs and the doctor. He screamed – loudly – in the middle of the night, for the first two years we were together. And, he’s so clingy, he follows us around the house and at night insists on lying on our throats.

Yesterday, I performed our radio show, Coco Soodek Live, from our house in Michigan. Just me, a mic, a mixer, a radio transmitter, a sound booth, feeds from the radio station in Texas, my producer in New York and my office in Chicago. And Jack.

A couple of years ago, we built a house in Michigan, where I go sometimes to work. Jack wants to sit next to me, on my desk, which isn’t very big. So, we gave Jack his own “desk” – a blanket covered mini credenza. And, sometimes, he sleeps on the daybed behind me.

Just before my show, I was having trouble with my sound check and I was getting frustrated. Jack jumped up to lie in the semicircle of my radio booth, which sits on my desk to stop sound from bouncing around the room. I said, “Not now, Jack,” and lifted him down. He either got mad or scared – he tensed and drew blood on my forearm. The engineer said, “3 minutes, Coco.” I’m bleeding, Jack is cranky and I can’t get my sound to stop echoing. But, I got it worked out, and closed the door to my office just before the engineer said, “Coco, Mic On!”

That’s when the wailing started. First, I tuned him out and did the show. He threw his body, again and again, against the door. He yelled. He screamed.

At every commercial break, I call Roxanne and get her notes. Yesterday, the first thing she said was, “Bring Jack into your office.  Maybe that will shut him up.” She could hear him through the door and the mic. I opened the door. He sauntered in. He took a seat. We came back from break and Jack got bored.

So he ran to the door and started screaming, this time from inside the room. I was in the middle of a heated moment about monopoly destruction of the Internet. I took a dramatic pause, ripped off my headset, stepped away from the mic and kicked him out the door.  He started to wail.

We edited Jack’s part out of the podcast version of the show, but now you know I am a crazy cat lady.

Listen to the show: