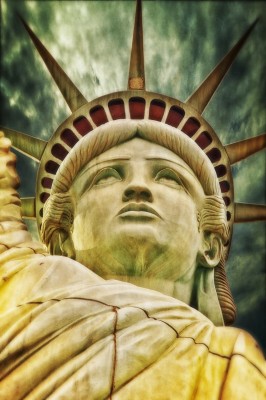 Things have come full circle since 1776. We are living in a new terrible age of monopolies who have been granted special power to rule us. That’s what the original tea party was really about – and that’s what the Hobby Lobby case is about today.

I’m a corporate lawyer – I love profit and progress. I’ll let others talk about the sexist and religious parts of the Hobby Lobby debacle – I want to tell you what it means to you as a citizen, as a provider for you and your family and as an entrepreneur. Stripped bare, the Hobby Lobby case is the almighty highest court in the land telling you that the religious views of 10 people who own companies are more important, more powerful, more valid than the religious views of the people who work at those companies.  Ironic, when you consider the opening words of the document that birthed our nation:

We hold these truths to be self-evident, that all men are created equal…

In the the Hobby Lobby case, 10 corporate owners sued the government to get out of the law that says that employers have to provide a basic level of insurance if they provide health insurance at all. (The owners of Hobby Lobby get a tax break for the money they spend on employee health insurance.) Basic insurance includes contraceptives that doctors long ago decided was medication. But, the 10 owners in Hobby Lobby don’t think some contraception is medication. So, the Supreme Court let the religious feelings of the 10 owners of Hobby Lobby trump science, law and the religious views of the employees who do believe that contraception is medication. But, this wasn’t about religion – this was about power; about who is in charge. What the 5 old, male Supremes said was that the guys who own are more important than the thousands who work.  Goliath calls the shots. Drop that jaw bone. Do what you are told and be grateful you’ve got a job.

It is time to declare your independence from the people who think they control you: the monopoly powers, the rich guys, the Supreme Court, and anyone else who doesn’t get the whole point of America: for you and me to be totally free, for you and me to be as powerful in so many ways as the guy who’s got a lot of money.

It is easier than you think to declare your independence, because you are an American with the power to speak, vote, spend and own. The greatest thing about America is you and I and everyone else gets to speak. In the old days, you could use your power to speak your mind as you please. But, the scales have tilted so far in the direction of the 10 guys who own everything that you now have an obligation to say what you really think. (Do you really think your life is better off relying on some rich guy at the top to make sure you get a job and opportunity and a salary and health insurance and clean streets and safe bridges?)  You also need to vote like your country depends on it. If you and a few people you know vote in every election we would have a much stronger country. So, you’ve got to vote and bring 2 people with you who didn’t vote last time.

You also have to spend at local stores and with companies that believe as you believe. If you hate the Hobby Lobby decision, then don’t shop there. Buy your bric a brac, pipe cleaners and glue somewhere else, preferably at some store owned by one of your neighbors.

Finally, you’ve got to own. Remember what the Supreme Court said: if you own your company,  you get to do all kinds of things to defeat federal law if it conflicts with your religious beliefs.  Please don’t believe Hobby Lobby is an isolated incident – this is the beginning of a new class of royalty that gets to make different rules for themselves.

Our Declaration of Independence in 2014 is simple: speak, vote, spend and own.